A visit to Smith Point

Posted by ALICE MELOTT in Bolivar, The Storm on January 12, 2009 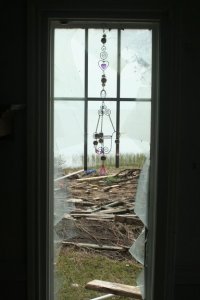 “You asked in your blog about Bolivar, “where did everything go?” Well, for starters, I think a whole lot of it went to Smith Point, including one of the 2 people who escaped Bolivar at the last minute. My brother-in-law and the sheriff found him alive and took care of him! The Nashes have 2 family homes in Smith Point. My sisters-in-law had a permanent home, and the other one is more a fishing place. There were roofs from at least 3 houses in the yard. And Shannon, my brother in law, is using wood that floated on to the property to try to rebuild the house. It was a one story house on blocks that has been there since the 1930’s!

Here are the rest of Gail’s pictures. They are an unembellished reminder of that which we believed we would not, could not forget… It ain’t over.

Essays by this author can also be read by joining http://www.facebook.com/alicethewriter.

Posted by ALICE MELOTT in Bolivar, The Storm on December 23, 2008

I need to talk about plastic bags.

True confession: About twice a week I take the 16 plastic bags (usually doubled) that they give me at the store to carry home my dozen or so items — and I use them to pick up dog poop and line wastepaper baskets and whatnot — and then I throw them away, feeling pretty righteous that I reused them, if I think about it at all.

As I drove off the Bolivar Ferry on Sunday, I was immediately struck by the cotton field to my left — a vast expanse of stick-like shrubbery with balls of white on thousands and thousands of its tips.

END_OF_DOCUMENT_TOKEN_TO_BE_REPLACED

Posted by ALICE MELOTT in Bolivar, The Storm on December 22, 2008

I finally went to Bolivar yesterday.

I hadn’t planned it. I went out for coffee and wound up on the ferry. There was no wait, and schools of dolphins met the ferry coming and going. It was magical in its way — cool, gray, serious, but surprisingly beautiful — like a Eugene O’Neill play.

I’ll leave you to ponder the pictures yourselves. We’ll talk tomorrow after it’s set in. Here’s my image gallery…

END_OF_DOCUMENT_TOKEN_TO_BE_REPLACED

Posted by ALICE MELOTT in Bolivar, The Storm on October 26, 2008

Despite the devastation there, all signs point to rebuilding Bolivar — with modern building codes and infrastructure and the new 4.5-foot vegetation line (to be announced in about a week by the GLO). In a few years we’re liable to be looking at Bolivar as the next gen high-end beach destination!

Read about the upcoming permitting process and plans.

Essays by this author can also be read by joining http://www.facebook.com/alicethewriter.